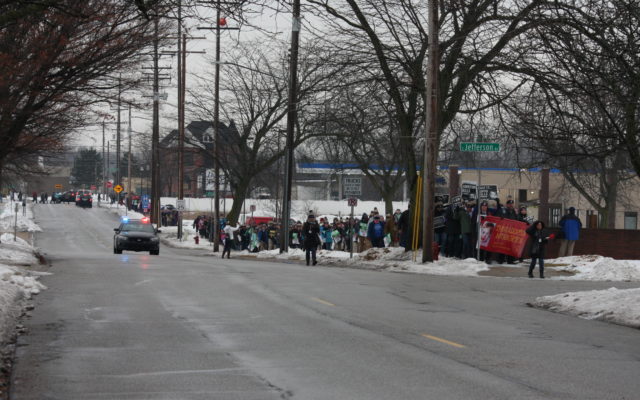 A voice for the voiceless. That’s how participants in a March for Life in Saginaw on Friday, January 24 describe their call to action in speaking out against abortion.

The march took place from the Holy Family Church on S. Washington Ave. to the Cathedral of Mary of the Assumption on Hoyt Ave. starting at 10:00 a.m. About 500 people attended the event, according to organizers, while another 200 traveled to Washington, D.C. to attend the annual national March for Life.

“It tells me that people here are real advocates and defenders of human life. They’re very much engaged in the pro-life movement. All life is sacred, we believe, from conception to natural death. It’s our responsibility in any way that we can to promote the dignity of human life at all it’s stages. So the people that have come out to this march, that’s why they’re here: they want their voice to be heard.”

In the Michigan legislature, a bill is currently under consideration which would ban a procedure known as dilation and evacuation. The bill was introduced after a statewide petition drive. The legislature has 40 days to take it up or let it go to the ballot. If both houses approve the measure, it will not need the governor’s signature to become law.

“I think it’s not only important, it is a significant step in the protection of human life, to get all of these signatures that will help this bill pass and become law.”

Wynonna reveals during Naomi Judd's public memorial that she'll do The Judds: The Last Tour

A Tornado Has Caused Extensive Damage In Gaylord

A Tornado Has Caused Extensive Damage In Gaylord

22 hours ago
Connect With Us Listen To Us On